Yves Saint-Laurent, was a French fashion designer who, in 1961, founded his eponymous fashion label and is regarded as being among the foremost fashion designers in the twentieth century. 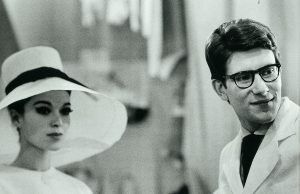 He was amongst the first to pioneer androgynous chic, blurring gender lines on catwalks and billboards. In 1967, he introduced Le Smoking, a tuxedo for women to define the modern woman. Its statement was unequivocal: a modern woman, if she so wished, could now literally and figuratively wear the trousers, and look damn good doing it.

Yves Saint Laurent advocated for diversity early on, casting and opening doors for deserving models like Naomi Campbell, who credits the designer for her first French Vogue cover. Saint Laurent’s also was part of the influence for the careers of models like Iman, Campbell, and Jourdan Dunn creating a more diverse and represented industry.

You’ll see this style influence in this frame line. In this collection you’ll see frames that look strong, modern, and fabulous on both a man and woman.

HOW DID WE DO?